Third Night through Sixth Night and Christmas Too! 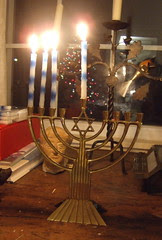 DSCF1783
Originally uploaded by Teckelcar
We are busy, busy busy and the posting is irregular at best.

So here is a medley of pictures from the past few nights.

On the third night of Hanukkah we have featured the menorah at my mother's house. She is not Jewish, but we have one for when Hanukkah overlaps with our time up north. If I remember correctly this menorah was given to Larry and I shortly after we had children by his paternal grandmother. It was after one of our visits to Florida when she gave it to us.We already had at least one at that point and decided it would be nice to have this one up at my mother's house.

I like how you can see the reflection of my mother's Christmas tree in the window behind the menorah. It looks pretty and captures the two holidays in one picture. 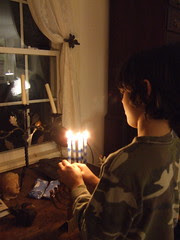 DSCF1797
Originally uploaded by Teckelcar
Any way back to Hanukkah, each night we have had different children place and light the candles. On the fourth night Nate got the honor of lighting them up. I like how you can just get a hint of his profile in the picture. The warm glow of the candles' light on his skin is nicely captured by the natural lighting setting. I did not have to doctor this photo except for rotating it from the horizontal.

The candle in the candelabra behind the menorah has wonky candles, they really do lean at all sorts of crazy angles. They got softened by the sun during the summer and ended up bending all over the place. I try to twist them around when I take pictures of our menorah, but I forgot to here.

After the candles burnt down for a bit we noticed something interesting about our menorah's candles. 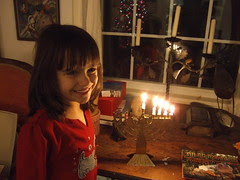 DSCF1802
Originally uploaded by Teckelcar
They had burnt down on a staggered fashion irrespective for the order in which we lit them. The shamash (the central candle) really should be the shortest, but oddly the one on the far right is with the flames describing a perfect line ascending upwards from right to left. Rebecca looked very cute and we thought we would share this bonus picture of the fourth night. I think she is very excited over the prospect of sledding, yet more Hanukkah and Christmas the following day. We spent the day sledding and decorating my mother's tree and it was great fun for all. When we arrived there was well over a foot of snow and the sledding hill is nicely covered. 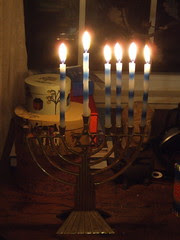 DSCF1815
Originally uploaded by Teckelcar
The fifth night Jake got the honor of lighting things up, but his picture didn't come out as nearly as well. So we will just have to be satisfied with a shot of just the candles. He enjoyed reciting he blessings ans carefully lighting each candle.

This brings us to the sixth night. Rebecca got to lite the candles and things got a bit crazy. Nate had a hard time fitting in the candles, so they have some of the same crazy angles of the candelabra in behind. I think they all fit together.

And of course here is a picture of my mother's christmas tree. 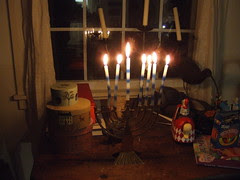 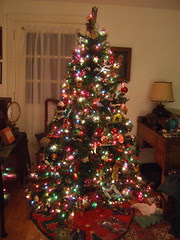 DSCF1821
Originally uploaded by Teckelcar
Posted by Sarah at 2:20 PM