Artist of the Week: Becoming an American 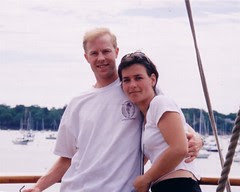 Jon and Manuela
Originally uploaded by Teckelcar
This week I'm doing something just a bit different. My mother called me today and during the course of the conversation she announced that my brother's wife, Manuela, just became an American citizen.

Manuela originally came from Argentina. She has been in the US for quite some time, if I remember correctly she came here to attend high school. Anyway at some point she met my brother out in Colorado and they started dating.

I first met her in 2002, which was when this photo was taken. It was at a huge family reunion and I have no idea what possessed my brother to drag her back east for this event. I'm amazed she didn't run away after meeting all of us and I know this started speculation about the seriousness of their relationship. She was a big hit with the family and I remember little Rebecca (not even a year old!) took quite a liking to her.

wedding
Originally uploaded by Teckelcar
Two years later (and a bit of nudging from both me and my mother) they wed at my cousin's house in Vermont.

It was a lovely ceremony and it was well worth pulling Jake and Nate out of school to trek up north. The bulk of the guests were from my side of the family with the rest being friends. Fortunately Manuela's mother was able to come, but her brother was unable to come from Argentina.

Not long after Manuela started the very long process to become a US citizen.

Now she can call herself an American and soon she'll be finishing her nursing degree. I'm so excited and proud of my sister in law. It's a very big decision and not one lightly made.
Posted by Sarah at 11:37 PM