kids and puppies
Originally uploaded by Teckelcar
Yesterday the kids did not have school. It was the end of term and the teachers had a work day to sort out grades and what not. Which I heartily approve of, they need the extra time to get it all done.

Anyway this meant we had a free day to do whatever.

As I had mentioned before, 5 and 1/2 weeks ago Dell's sister (and John's half-sister) Trudy had a litter of six. The puppies have been growing like weeds and Diane and I thought it would be fun to bring the kids on over. My kids would get to play with six adorable puppies and the puppies would get exposed to some dog savvy and gentle kids. 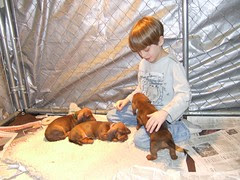 red boy with Max
Originally uploaded by Teckelcar
It's full of win!

The only downside is that it's a solid two hour ride to Diane's house, but that is what in-car DVD players are for. We ended up watching Pink Panther cartoons on the way up and Order of the Phoenix on the way home. [Note I refuse to watch the Steve Martin Pink Panther flicks. I think Mr. Martin is a brillant comic in his own right, but come on, redoing Peter Sellers. It is just not going to happen.]

Anywho, the ride up was fine and the puppies were happy to see us. Even little Miss Pink, who has been a bit shy, swarmed all over the kids with her tail wagging. Speaking of wagging tails, the puppy climbing on Max was wagging his tail so hard it looks like a ghost image in the picture. 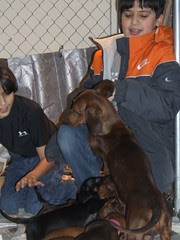 Jake Trudy and pups
Originally uploaded by Teckelcar
Even Trudy, the puppies' mother, got a bit of loving. She zoom around us with the puppies trailing behind trying to hit the milk bar. She is just like her brother Dell, full of energy and kisses. She had no problem with a bunch of kids playing with her puppies. All she wanted was some attention and some biscuits, but that is what I would expect of a Crunch puppy.

After a bit the puppies started to get sleepy and we went upstairs for cupcakes and ice cream. Nate raced through his snack and asked if he could go downstairs again to sit with the puppies. Diane said it was fine and down he went. I was very pleased that Diane trusted my son enough to let him be with the puppies by himself. She knows him well enough and saw how good he was with the pups that she was comfortable with him being alone with the pups. 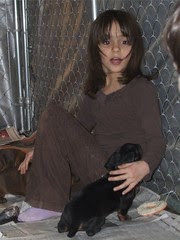 Rebecca and pups
Originally uploaded by Teckelcar
Once we were all done with snack we trooped back down for some more puppy time.

It's hard to say who had the most fun. For the most part the kids had a great time. Even Jake who didn't want to go in the first place had a good time, though he was the first to want to go back home.

I think the biggest surprise was Max. He was a bit fidgety at first, he really doesn't like kissy dogs. But after snack and watching the puppies he got in with them and really started to enjoy himself. In fact he announced that he loves the puppies and wants to come back soon this month.

Since the month is almost over coming back in January is not going to happen, but sometime in February is a distinct possibility.

Oh and the title of this post, it the title of a great little book that does a great job showing what puppies do.
Posted by Sarah at 9:39 AM