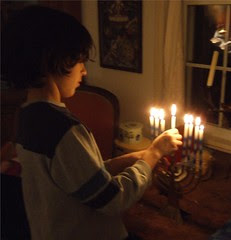 seventh night
Originally uploaded by Teckelcar
Or... a lame attempt to catch up.

The rest of Hanukkah really did happen and I have the pictures to prove it, but with all that was going on the whole blog thing fell by the wayside. I should be a bit more realistic next year and use the previous years photos. I could queue them all up ahead of time and then I wouldn't have to do anything very complicated when we are visiting family.

Anyway, back to Hanukkah 2008. Nate got the honor of lighting the candles on the seventh night. I love the whole warm glow of candle light. It can be a bear to photograph in, but when it works the pictures are well worth the effort. At this point with eight candles burning the menorah throws out a fair bit of light. With Nate holding still for a change I was able to capture the moment. 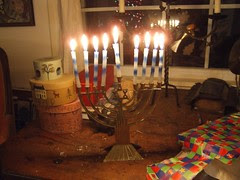 eighth night
Originally uploaded by Teckelcar
On the eighth night I wasn't nearly as lucky with Jake. It was Jake's turn to the light the candles, but he came out all blurry in each and every one. So I had to settle instead with a shot of just the menorah. Which is a pity because I did get a nicely composed shot of him with his brothers looking on, but it came out far too blurry. And that, my friends, is truly ironic. Nate is my little bundle of energy. Most of the time he is almost vibrating with pent up energy. In comparison Jake is down right sedate.

Enough about them, lets get back to Hanokkah. I like how the eighth night still life turned out. You can see bits of wax on the table with a scrap of wrapping paper nearby. Hanukkah has drawn to a close and you can almost sense that in the picture.

It was a lovely eight days, the only thing I would change would be to make up a schedule of who does what ahead of time. They all want to light the candles and I had a hard time keeping track of who put in the candles and who lit them each night.
Posted by Sarah at 11:35 PM