Artist of the Week: The Little Foxes 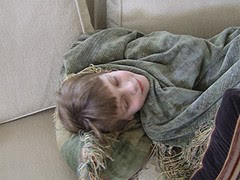 Max
Originally uploaded by Teckelcar
Max is this week's artist. He is all cuddled up in a blanket on Grandma's couch. Larry took this picture and I didn't know about it until I downloaded all 111 images this weekend. It was a very pleasant surprise for me when I was scanning through all the pictures. I think he is always cute, but he looks better when he isn't mugging for the camera. In this picture you actually get to see his sweet smile.

Anyway, Max is this week's artist because of his foxes. For whatever reason he likes to draw foxes, which is a bit unexpected due to his current penguin obsession. He has a huge collection and we even found a Wii game for him about penguins. 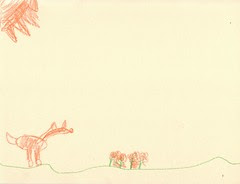 fox and flowers
Originally uploaded by Teckelcar
He drew this before we went on vacation and proudly posted it on the fridge. He then declared that he was very good at drawing foxes.

In the first picture he drew there is a fox, some flowers and I think a bunny is hiding behind the flowers. When I asked him about the picture he told me that a bunny was there with the fox. So I have to take his word on it. If you look closely it looks like there is something amongst the flowers. It's a bit hard to tell because Max has a very minimalist tendency towards color. Generally he uses one, maybe two colors once in a while branching out to three. For him, a drawing is more of a process than a finished product. 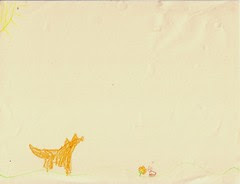 fox and bunny
Originally uploaded by Teckelcar
After all my questions Max then sat down a drew another picture, this time with the rabbit clearly depicted behind the flower.

I think the little bunny is very cute and you get to see one of the few examples of Max utilizing a third color. I don't like changing how our children draw, they do need their own voice, but it does help then grow when you push them to expand their boundaries.

I remember when I was little and I started to draw trees like all the other kids in my class,. My mother did not criticize, but did ask me why I drew it that way and made me think about my drawing. She was able to get me see that I could go my own way and that is what I want to do for my children.
Posted by Sarah at 11:56 PM