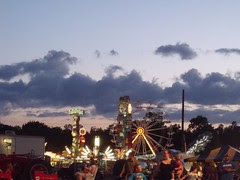 2012 County Fair, a photo by Teckelcar on Flickr.
It's County Fair time which heralds the end of summer.

This year only the dynamic duo wanted to go. Nate was only interested if he could bring a friend and all Jacob wanted was funnel cake. It was a little sad, but honestly it was a lot simpler to keep track of two children as opposed to four, admittedly the older two could go off on their own, but still...

Anyhoodle, It was a beautiful night on Sunday and since Larry wasn't interested in going either I ended up giving Meryl a call.She was game to check out the fair and eat bad fair food. She headed on over to our place to pick us up and go to the fair.

Apart from Max getting a bit queasy after going on a few too many rides in quick succession, we all had a great time. I got wristbands for both Max and Rebecca and they got to go on all the rides they wanted and as many times they wanted (hence the queasiness). We were able to get Max off of the ride in time and in typical little kid fashion was immediately over it as we headed out to pick up some funnel cakes before going back to our house. We stuffed ourselves with fried dough goodness and Meryl even got a deep fried Milky Way on a stick. The deep fried candy bar was a disgustingly delicious treat. It was very rich and decadent, all melty inside a batter crust. It made the funnel cake seem almost healthy.

And speaking of funnel cake, I got a second one to bring back home. The boys were very appreciative of the treat and quickly descended on the plate.
Posted by Sarah at 11:52 PM