Artist of the Week: Soccer Camp 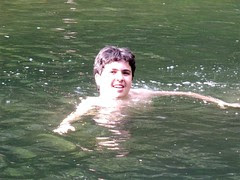 Jacob, a photo by Teckelcar on Flickr.
This week's artist is Jacob for his performance at soccer camp.

The one thing Jacob truly misses is soccer. His schedule is full, dare I say overflowing, with all his commitments in marking band, pep band, show choir band, robotics, and chess. He would love to play for his school, but there is no way he can shoehorn it in to his packed days.

And so we enroll him in a week long soccer camp every summer.

The organization we use is Challenger Sport's  British Soccer Camps. The style of play taught by the coaches meshes well with how Jacob plays soccer and it is just plain fun. Jake has show some very clear leadership skills during this session. Admittedly his biggest goal was to convince his team to select a country that would have a white jersey, the campers are divvy up into teams that are named after different countries. The kids are then to wear the color associated with the country's world cup uniform. Jacob got his team to agree to be South Korea and garnered the color white.

His soccer skills are also worth noting. Even though he only gets to play once a year, he can still give good game. Heck he even bowled over one of the coaches today. Coach Dave was equal parts stunned at being knocked down (I'm so out of shape, I'm getting knocked over!) and being highly amused.

I'm hoping I can find a young adult league for Jacob to play in next year. It'll do him good.
Posted by Sarah at 11:50 PM