Artist of the Week: Matisse 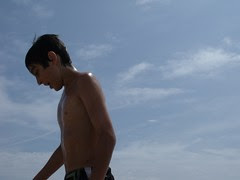 Nate, a photo by Teckelcar on Flickr.
This week's artist is Nate.

I love this picture I took of him when we were at Virginia Beach. As I recall I was sitting on my towel with my camera in hand when a rather wet Nate strolled by. I looked up and quickly took a picture. It is a far from perfect, but the lighting and the colors make me happy and honestly that is a big thing. If the picture makes me happy, it is a good picture.

As for today's art, well it made the artist in question less than happy. It's not a bad piece, but he thinks it would have been better if he could have done it the way he wanted. 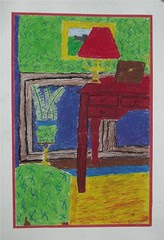 Matise still life, a photo by Teckelcar on Flickr.
The assignment was to draw, using oil pastels, a colorfully abstract picture in the manner of Matisse. And this was the challenge for Nate because he wanted to use far more realistic tones. So much so that months and months later he brought that up when I was looking at the picture today.

Ironically his picture was one of the few selected from his class for the school system's Arts and Sciences Fair." Which brings his total up to three now for this year's fair. Mind you I did not see this at the fair, Boy only told his father about the piece. Why he didn't tell completely mystifies me, particularly since I was the one with the bleedin' camera. It wasn't until a few weeks ago when I was rooting about his school work when I stumbled upon it and noticed the neatly done tag from the Arts and Scence's show.