Artist of the Week: Fabulous 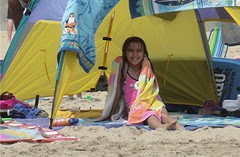 Rebecca, a photo by Teckelcar on Flickr.
Rebecca is this week's artist due to her efforts to make the dogs a bit more fabulous. Which is an understandable goal when the only other female in your family is your mom.

Having three brothers is tough when you want to be a girly girl. She can do a mean sliding tackle in soccer, but she does it on an all girl team. As soon as it was possible she asked to be on a girl's team and left the co-ed teams behind. Now she is on the travel team and is eagerly awaiting her first tournament. 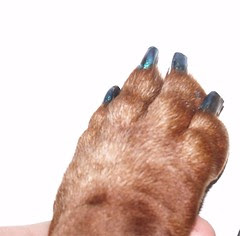 Dell, a photo by Teckelcar on Flickr.
In the meantime she is making her world a bit more fabulous, one dog at a time.

I had trimmed the dogs nails today and jokingly referred to it as a pedicure. This got Rebecca's attention and she decided to go one better and asked if she could put nail polish on the dogs' nails. I could see no harm in this and gave her my blessing.

Dell was her first victim/client. She collected our nail polish and asked which one we should use. Blue ended up being picked for Dell. She hustled him outside and proceeded to paint his rear nails. Once she finished I held Dell in my lap as his front paws were painted. It's not very easy to see the blue, but it is there on all four paws. 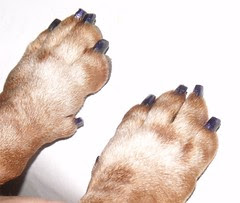 John, a photo by Teckelcar on Flickr.
Then it was John's turn.

Since Dell got the blue John got dark purple. Like his brother, John was very good-natured about the whole process. Heck Max found the smell far more objectionable than either Dell or John. Neither dog seemed to mind and did not try to lick the polish, an obvious concern with these two particular dogs.

In the end Rebecca was very pleased with her handiwork and declared John and Dell to be fabulous.
Posted by Sarah at 10:43 PM