Artist of the Week: Flag

looking down river, a photo by Teckelcar on Flickr.
This week's artist is Jake.

He really doesn't like to be photographed so I have to sneak up on him. I'm only allowed a few pictures of his face, so the rest have to be on the sly. I took this picture while we were up in Vermont last month while we were near my old swimming hole. He never knew I was behind him as he was walking along. Times like that are why I turned off all the extraneous beeps and such that my camera makes. A brief click when I press the shutter release and the low whine of the motor that moves the lens are all that can be heard.

As for what boy did to deserve the honor, well it is a combination of idea and an execution too small (and long since lost) to picture. Both were done for the last day of soccer camp which I already mentioned at the beginning of the month. 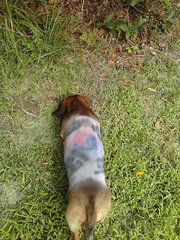 SK John, a photo by Teckelcar on Flickr.
A few weeks ago I mentioned in the post featuring Max there were contests concerning the teams' flags. Largest, smallest, and most creative were recognized. Jake didn't win for largest, but he did garner smallest and most creative.

The smallest flag he quickly knocked out on a piece of paper the size of a couple of grains of rice. It was placed in a recloseable plastic bag so that it would not be lost (or course it did disappear once we were done). The most creative, as you can see, was John.

Jake didn't do the actual hair spraying, but it was his idea. So I have to give him credit. Amusingly when the results were announced the camp counselors made Jake go back before calling his name again.