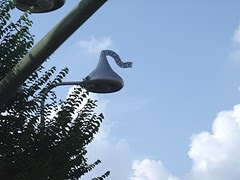 Hershey, a photo by Teckelcar on Flickr.
This last weekend was Nate's final lacrosse tournament with his summer travel team. It took place in Hershey Pennsylvania and is dubbed "The Chocolatetown Shootout."

Originally we had planned to make this a family vacation, we would watch the games and then go to Hershey's amusement park.However it was not meant to be. Between the various commitments the kids had amassed and Larry having his own lacrosse tourney over in North Carolina it was turning into a quick trip for just Nate and me.

As you can see Hershey, PA is very proud of being the home to Hershey chocolate. The street lights are all shaped to look like wrapped and unwrapped kisses and even the main thoroughfare's road bed has a decidedly chocolatey coloration.

Now the tournament was spread over three fields in the neighboring towns. One very frustrating aspect of the fields was the complete lack of signage. Just a small curbside sign would have made the situation much clearer.

Boy, meanwhile, had a great time. He got to play petty much every position. Nate would swap lacrosse sticks which caused me to be very confused over which boy is mine. Luckily he had on his bright read socks and I could pick him out.