Artist of the Week: Narnia 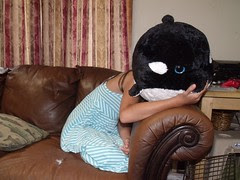 orca head, a photo by Teckelcar on Flickr.
This week's artist is not an orca, but instead Rebecca. The orca was Rebecca's gift to herself during her tournament last weekend. She has a fair amount of allowance saved up and when she espied this rather large Beanie Ball she decided she had to have it. The toy is rather absurd and she knows it. I'm not sure who noticed that the toy looks like it is Rebecca's head, but I am thankful it was pointed out and I got a picture.

Anyhoo this is not about large spherical toothed whales, but about art created by the girls that love them. 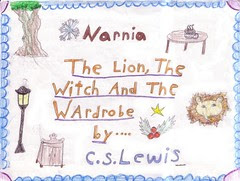 Narnia, a photo by Teckelcar on Flickr.
We have been tossing out last years school detritus when I came across a bundle of Rebecca's graded papers. Inside was a lovely book report on "The Lion, The Witch, And The Wardrobe." The report itself has many, many charming illustrations depicting scenes within the book, but they are intertwined with the text and in pencil.

Rebecca did a lovely job and certainly earned her 100%.