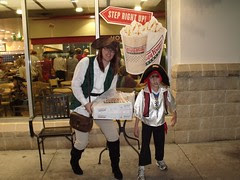 two pirates, a photo by Teckelcar on Flickr.
Today was my favorite nonsensical holiday, "Talk like a pirate day."

This year I found out that Krispy Kreme doughnuts would give you a free glazed doughnut if you spoke like a pirate, a full dozen if you were in full pirate gear.

Whoa, a full dozen if you dressed as a pirate. I could totally get into that. Even Rebecca was interested, but when I told her to ask Max if she could borrow his costume Max said that he wanted to dress up as well.

Even better was the fact that today the kids have a fencing lesson and the club is a scant two miles from our nearest Krispy Kreme. Nothing like a little swashbuckling to get you in the mood for a pirate adventure.

The line of course was long, but it was a jolly crowd that was pretty evenly split between pirates and landlubbers. Rebecca was initially horrified that Max and I were going out in public as pirates. However once she got inside she realized how much fun it could be. She told me next year she wanted to dress up.

And yes we got two dozen doughnuts for absolutely nothing. Arrr!
Posted by Sarah at 11:46 PM