John and Dell, like all dogs, have different barks for different events or things. The soft whine when they want to be fed, big blustery barks when deer are espied on the lawn, the bark-bark-bark when chasing squirrels, and so on. I can pretty much guess what is going on by the type of bark I hear.

Today I got to hear the "Oh my gosh what is this I want to get it but I'm not sure if it's safe" bark from John while I was puttering about. It didn't quite sound like "I've found a snake" so I wasn't in a big hurry to pull on my boots and tromp down into the woods and find out what all the fuss was about. Eventually I made my way to John with a leash in hand since I wasn't too keen on having to carry a squirming 28 lb mass of dachshund back to the house. 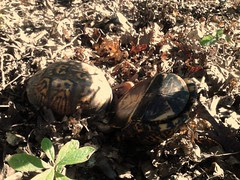 turtles, a photo by Teckelcar on Flickr.
It wasn't too hard to find John and I was happy to see that it was not a snake. It was in fact a couple of Eastern Box turtles and, well, they were very busy. First priority was to leash John, who emboldened by my presence to charge at the turtles. Once I had the dog under control I took stock of the situation. I was very glad I had my phone stuck in my pocket so I could capture for all the world to see what one friend called "a very private moment."

Once back inside, with a now very sulky dog, I looked up the mating habits of the Eastern Box Turtle. It turns out that the breeding season lasts from April to October, with the eggs lain late in the season overwintering in the underground nests. Who knew dog ownership could be so educational.
Posted by Sarah at 11:21 PM

I guess you can turtles along with the birds and bees.