Artist of the Week: Charming 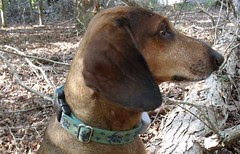 John, a photo by Teckelcar on Flickr.
This week's artist is John and surprisingly it is not for digging holes or eating dirt, his two most favorite activities.

This past weekend we had Rebecca's birthday festivities. She had a rather grown-up affair (at least for 10 and 11 year old girls) of a movie followed by a treat. Four of her good friends came out and I did the driving since Larry was off chaperoning and working at a marching band event.

I arranged for the girls to come to our house first since I wasn't sure which showing of "Wreck it Ralph" or for that matter which theater we would be attending. As the girls arrived in fairly rapid succession, they were delighted by our dogs. Normally I view Dell as the ambassador for the breed since he loves everyone, but he only lasted about 5 minutes. Apparently 5th grade girls overwhelm the poor dog, he ended up retreating to a few rooms away. John, meanwhile lapped it all up. He was happy to be the center of attention and didn't even mind being picked up.Heck he even tried to worm his way onto the van when we left for the movies.

When we got back he was very happy to be fussed over by the girls. At least two of them announced that they loved our dogs and wanted to get ones just like them. I think John as a very nice dog, but I never thought he could be a poster pup for dachshunds. In fact he is a real pain in the keister when around unfamiliar dogs, barking and leaping about. I guess he's just a people oriented kind of dog that loves the attentions of girls.