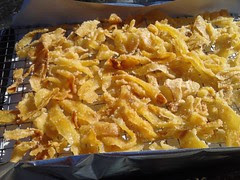 ginger, a photo by Teckelcar on Flickr.
Part of the traditional big Thanksgiving  run up for those cooking  is the buying of the ingredients. I try to minimize last minute store runs, but alas there always seems to be that one ingredient. This year it was the acorn squash, I completely forgot about it until the Wednesday before.

Then there is the one thing you can't find. One year it was sage flavored sausage, I had it improvise with plain and load up the stuffing with sage. Another year there was the great pumpkin shortage, fortunately I had a can hidden in my pantry and I was able to make my pumpkin pie. This year it was crystallized ginger, an important ingredient for our cranberry relish.
I went to three different grocery stores, two didn't even carry it and the third was sold out. I could have gone farther afield, but I decided my time was better spent making my own dang ginger. I settled on Alton Brown's recipe and used a pound of fresh ginger. It was pretty straight forward, however it took me twice as long to cook down the ginger syrup mixture than the 20 minutes sited in the recipe. I used my food processor to slice the ginger using my ultra fine blade so as to get consistently thin slices. The end result was well worth the effort, I have a boatload of very flavorful candied ginger that is full of zing. I love the stuff and I can eat it like candy. It's a very nice that I can now make my own.

Oh and I picked up the neatest trick for peeling ginger, use a spoon!