Artist of the Week: Superior 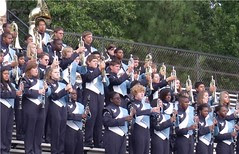 At Attention, a photo by Teckelcar on Flickr.
This week's artist is Jake, or Jacob as he prefers to be called now, and his high school marching band. After a few years of a dry spell they earned the much desired "superior" rating at the state level assessment, which is a very big deal.

The band has been working very hard and this is the best show I have seen. During their first assessment this year they just missed the superior rating by half a point. Inspired, the band redoubled their efforts and were able to pull it off at their last competition of the year.

It's been a good year for the marching band and if they are able to garner another superior rating with orchestra this winter they will be a State of Virginia Honor Band. So keep of the good work, you have done something to brag about.