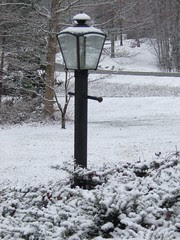 lightpost
Originally uploaded by Teckelcar.
This winter has been a bit of a bust. We didn't get any significant snowfall. We got a dusting in mid January and a minor snowfall on the first of February. But that's it. North and to the West of us there has been all sorts of winter weather and the associated school closings. All he have had is one lousy two hour delay.

Instead we have been see sawing back and forth between the low sixties and the mid twenties. Heck it was 70 in January and most of us went barefoot.

Mind you, I do appreciate what this has done to my home heating bill, but I miss winter. I like being able to count on the snow sticking around longer than twenty four hours. My poor daffodils have struggled up and have been burned at least once by a cold spell following a string of balmy spring like days. At this point it's a crap shoot on whether or not they bloom when Spring settles in for real.

By writing this I know I am tempting fate, but it is the penultimate day of February and I really don't think we are going to get any serious winter weather this season. 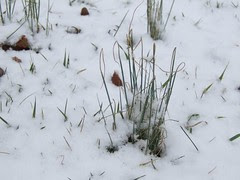 Maybe next year we'll get a rip snorter of a winter storm.
Posted by Sarah at 1:47 PM