Rally was quite a character. 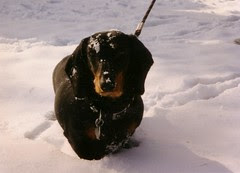 snowdog
Originally uploaded by Teckelcar.
She was the smartest dog I ever knew. Crunch quickly became much bigger and stronger than Rally, but she always found a way to get him to do what she wanted.

In our first house the dogs spent most of their time in the kitchen. In one corner was the dog bed and nearby was a floor register. In the winter the spot nearest the vent was by far the warmest and was the preferred spot to lie in. Crunch would usually bull his way onto the bed, muscle Rally aside and claim the spot for his own.

To Rally, this was not an acceptable situation.

She would never be able to physically displace Crunch but, she could trick him.

She would head over to the back door and bark wildly. Larry or I would go over to open the door and let her out. As we opened the door Crunch, convinced that something was up, would charge outside. Rally would meanwhile calmly return to the dog bed and claim the good spot. About 15 minutes later Crunch would return and sack out next to her.

The first few times Larry and I were mystified. Why would she not go out after putting up such a fuss. Then it dawned on us that it was all a ruse to get Crunch outside. Crunch never figured it out.

She was also very usual for a smooth haired dachshund. In the winter she loved the snow and would happily break trails while Crunch would trail behind. In the summer she loved to go swimming. When we went down to the lake would have to leash her when she was in the water to keep her from going out too far when pursuit of ducks.

Crows had to be chased from the yard and were forbidden to be near our home. Whenever she spied a statue, be it a 20 foot statue of a man or a two foot representation of a horse it was bad news. Once she caught sight of it she would voice her disapproval in a burst of sharp barks. Normally this was not a problem, but around Christmas time it would be a bit embarrassing. One year a house along our normal walk went whole hog with all sorts of Christmas paraphernalia. The worst was the lights that blinked in sync with the music "The Little Drummer Boy". She hated the whole display with a passion and would bark fiercely at the whole mess. I was torn. One one hand I didn't like all the noise, but on the other I agreed that it was quite tacky.

She loved apples and tomatoes would would do anything for them. We had to keep a portable fence around the pots with tomatoes to keep her out. Many a time I would she her staring at the tomato plants, willing for one to drop off and roll her way.

She was also unfailingly gentle. Anyone could offer her a treat and she would daintily accept the offering. She never snapped or grabbed.

Vets loved her for solid temperament. Most vets are leery of dachshunds. All too many of them are poorly bred specimens that will snap at the slightest provocation, but never Rally. She would stoically stand there and would suffer all sorts of indignities. At most I would only have to place my hand beneath her muzzle to steady her and prevent her from leaving the table.