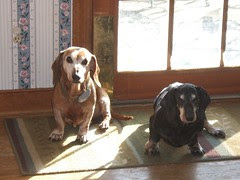 olddogs
Originally uploaded by Teckelcar.
Last night was cold, if fact it was the coldest it has been in the past two years. So it was a bit nippy this morning as I shooed the dogs outside. I took pity on Miss Rally and put John’s coat on her before I plopped her outside. The red dogs are fully mobile and can readily scoot back inside, but the old girl needs to be carried in and out and I thought she needed a little something extra to keep her old bones warm.

She, of course, was not amused.

She stood outside looking vaguely peeved that she had been once again dumped outside with the further indignity of wearing a coat. As she stood crosswise to the steps, occasionally barking to let me know that she wanted in, John shot outside and paused at the head of the steps leading down to the backyard. John caught sight of Rally in his coat and you could see him go “What’s that!” before he charged down the stairs to confront that mysterious thing outside.

Just before impact he slammed on the brakes and practically fell over when he realized it was Rally. As he danced before her going “It’s you! It’s you!” she coldly regarded him as though to say “Well, who else did you think I was?”

I think Rally accepts John and basically likes him in a doggy sort of way, but I also think she views him as a big doofus. Today’s little maneuver confirmed what a goofball he is. 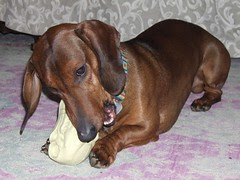 Chew
Originally uploaded by Teckelcar.
Posted by Sarah at 2:26 PM