Going to the Dogs

This past weekend I went to Northern New Jersey to attend a dog show and a regional club meeting. The show was the Dachshund Association of Long Island (DALI) specialty that is held right before Westminster and is part of a cluster of specialty shows that are viewed as preliminaries to the Westminster show.

Originally I was not planning on attending any of the shows, but my club was requested to send a representative to the regional meeting that was to be held in conjunction to the shows. As president I could have tapped another club member to go, I knew at least one was going , but I decided it really should be me since I’m not only the president but the regional rep as well (I volunteered since I’m very good friends with the regional president). Also the one of the members that would have volunteered to go in my stead has the reputation of being a bit of a loose canon.

The one problem with this particular trip was that two weeks before hand I’ll be attending a wedding in Manhattan and the weekend after the meeting we are driving up to Long Island for a Bar mitzvah (Hey Skinny Dan!).

That’s a whole lot of travel in a short period of time.

My first thought was to fly, and then a friend wanted to know if I could show her dog at the specialty. In the end I drove up with my friend with her dog Chad and my dog, John.

We had a great time and our dogs did as well. We got to see what our competition would be like this year and we got to be seen. I even got to hold Scraps (a dog in serious contention at the shows) in my lap for a bit. He is a very sweet little dog that gave lots of kisses. Here is what Scraps looked like this past summer. 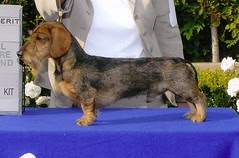 scraps
Originally uploaded by Teckelcar.
He is even cuter in the flesh. As an added bonus, if you click here it directs you to the video streaming from the Westminster show. After the ad, Scraps is the first dog you see up on the table.

Tonight I’ll be watching the show on cable and cheering on the dachshunds.
Posted by Sarah at 4:57 PM