Artist of the Week: Rock Star

This week's artist is Nate who is turning out to be a quite a rock star. 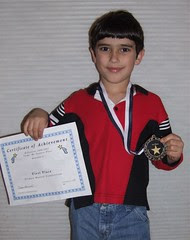 school1
Originally uploaded by Teckelcar.
On Friday we attended the District's reception for the Reflections contest. When we first walked in Nate had to be signed in and then we were directed to sit down at one of the tables scattered about. Once I was settled in I opened my program and was a bit puzzled. As opposed to the County reception, only one name was listed for each age division in each category. Then it dawned on me, Nate won the district! His entry is now up for consideration a the state level.

District
Originally uploaded by Teckelcar.
He got a nifty award and a certificate. After the speechifying we mixed with the other families and noshed on the spread (which was much nicer than the County's, you could actually get a meal out of it). Larry then found out that the winners of the state judging would be announced in April. This would be the last party (apart from the school's), from this point on everything will probably be done by phone and mail. The funny part was that Nate didn't realize that he had won until after we got home and told him. He had been expecting a formal announcement at the reception. All that happened was that he was called up, received his awards and got a handshake.

Last night was the school's reception. All of the kids that placed, first, second, third and honorable mention were recognized. First through third received medallions and honorable mentions got ribbons. I wasn't there (Max is sick), but Larry said they did a nice job with the awards. What I do know is that Nate came home with a boatload of stuff. 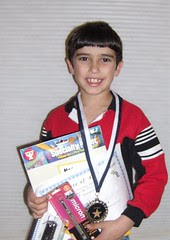 School2
Originally uploaded by Teckelcar.
He has a package of acid free paper with a special pen, a couple of pencils with musical notations on them, a sticker book with a musical theme, a harmonica with an instruction book and of course candy.

He was quite a celebrity last night. His picture was taken with the Principal and will probably end up in the local free paper

He was the only one this year to advance to the County level and the first one in many years to go beyond District judging. In a way it was nice for him to go with just his father and be the center of all the attention without his siblings. Nate even picked up a groupie. A girl (Gracie) from his grade spent her time hanging around Nate and, according to Larry, flirting with him. She was a real cutie, but Nate was more interested in her Heelys, then the girl wearing them. As they left last night she bade Nate good bye. Nate turned, waved and said "Bye Gracie!" Gracie was then heard to say "He knows my name!"

A line from Dire Straits immediately sprang to mind when Larry told me this: "Money for nothing and your chicks for free."

So far these are all the awards he has received. 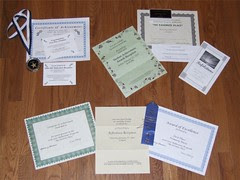 awards
Originally uploaded by Teckelcar.
It'll be interesting to see what happens in April. We think his main competition will be coming from Fairfax county. It's awash with money and over achieving parents.

And for those of you interested this is the score:

score
Originally uploaded by Teckelcar.
On the sidebar under Nate's music you can click on Laserquest and hear the piece. Meryl complained about what a big pain it was finding it and I though it would be nice to stick it there along with Torpedo.
Posted by Sarah at 10:24 AM