My Life is Going to the Frogs 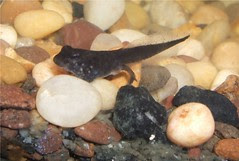 Getting front legs
Originally uploaded by Teckelcar.
The most exciting thing I have going on is the tadpole tank.

Monday (yesterday) I noticed one of the tadpoles had some very pronounced front leg buds. After a bit of googling I found out the front legs emerge elbow first, which pretty much matches what I can see of this little one.

This afternoon the boys were watching the tadpoles and noticed that one had three legs! Well it turns out it actually had all four. Interestingly it was one of the smaller tadpoles in the tank. Now, with its new four legged status, the tadpole has now been granted the title of froglette.

froglette
Originally uploaded by Teckelcar.
So far we have only one froglette, but several others are sporting the telltale front leg buds. Mind you, at the same time there are still a few that are just starting to grow their hind legs. 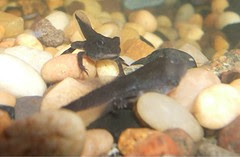 front view froglette
Originally uploaded by Teckelcar.
From the front the froglette has a decidedly froggy appearance, no longer is it a little blobby tadpole. So far it remains underwater and hasn’t shown an indication that it will become an air breather, but I know that will come with time. I think we’ll be releasing a few back into the wild in the near future.
Posted by Sarah at 11:51 PM