Artist of the Week: Invite 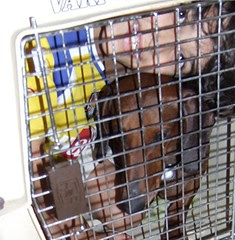 Nate and Dell
Originally uploaded by Teckelcar
This week's artist is Mr. Nate.

He's pictured here with Dell inside of Dell's crate. The reason he is in the crate was I had just commented to him that I was amazed when earlier both John and Dell had piled into the same crate at the same time. They both fit with some room to spare. Nate announced that he could fit too and proceeded to get into Dell's crate. Dell, never wanting to be left out, also climbed on in with Nate.

As you can see they both fit and Dell was not at all crowded, Nate , however, was a bit squished since he needed to bend over to fit inside. I then closed up the crate and offered Nate a biscuit which he politely declined. They were happy as two peas in a pod, but they were also equally happy to be let out.

Obviously Nate has no problems with close quarters, but he would rather be outside, ideally playing some sort of game. 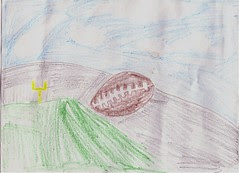 invite
Originally uploaded by Teckelcar
Currently Nate is playing football for his old school.He is having a great time and he'll probably play again next year. So right now it's all about football. He has practices 3 times a week and a game every Saturday. Football is a very important part of his life right now.

So when Nate brought home our invite to attend his school's open house I was not at all surprised by his choice in subject matter for front of the card. It's a neat little picture of a football suspended in midair with a set of goal posts on the far end of the field. I think it is a great illustration that looks even better in person.
Posted by Sarah at 11:59 PM