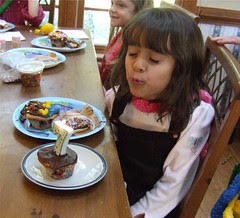 make a wish
Originally uploaded by Teckelcar
Sunday we had both Max and Rebecca's birthday party, or I really should say parties.

This year the dynamic duo wanted to decorate their own cupcakes and some cookies during their party. This sounded like a great idea, it would give the kids something to do and they would get to eat their creations.

We also did the party a little differently this year. Normally Max and Rebecca would both be inviting the guests, both names would be on the invites. Since they had a common pool of friends this made sense. Now, what with their being in separate classes and different soccer teams (more on that tomorrow), the pool of common friends is shrinking. So Rebecca had her list of invitees and Max had his own guest list. 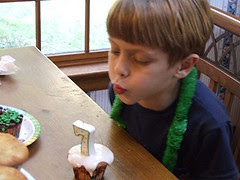 A wish is made
Originally uploaded by Teckelcar
It worked out very neatly, five guests apiece accepted the invitations. Ten kids is a fairly manageable number and we were able to divide them up for different activities, in a way creating two parties at the same time. The only hiccup on party day was tat one of Max's guest didn't show up, but Max never really noticed.

The day before the party Grandma, who had come down the day before with Grandpa, and I took Max and Rebecca party shopping. Our first stop was at Baker's kitchen, a truly amazing cake and candy supply store in the Richmond metro area. I have learned over the years that if I need something special for baking, it really is the only place to go. 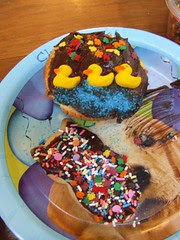 Rebecca
Originally uploaded by Teckelcar
We spent a long time checking out their sugar creations. They have the nicest selection of little three dimensional sugar shapes that you can just place on top of whatever you have frosted. After quite a bit of discussion they picked out two sets of birds, two packages of cute little dinos and a dozen little yellow duckies. Then to pad out our decorating options we got a container of leaf shaped quins (ie sprinkles) and another of Halloween jimmies. I have some blue and green sugar along with some other quins at home.

Then we picked out some party plates, got a pinata, beverages and party favors. All that was left to do was bake the cupcakes and the cookies.

The cupcake decorating was a definite hit with all the kids. We set up Rebecca's party first and let the girls frost their cupcakes cookies with chocolate or vanila frosting and let them go to town with the decorations. Rebecca's effort is pictured here and if you click on it itwill lead you to a photo set of all of the girls' cupcakes. 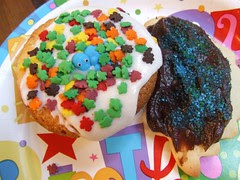 T
Originally uploaded by Teckelcar
Once the girls finished decorating I pulled out another cupcake with a big number seven candle on top and we all wished Rebecca a happy birthday. Then it was Max's turn. We ushered the ladies out and installed them at the table out on the deck.

The boys were tiring of the bouncy tent (I so got my money's worth on that thing) and were eager for their turn. On the whole I'd say the boys' efforts were a bit messier, but you have got to love the one pictured here. The dinosaur looks so cute peeking out of its pile of leaves. If you click on his picture it will lead you to the boys' set. Unfortunately I forgot to photograph Max's cupcake, but I did get Jake's little masterpiece. Max too got a cupcake with a candle to blow after this guests were done decorating their food. 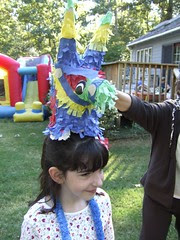 pinata head
Originally uploaded by Teckelcar
he two parties then came together for the pinata. This year the pinata just barely hung on through all the guests. Jake and Nate were at the tail end and did the honor of finishing it off. Nate could have done it, but after a quick negotiation with Jake he did a quick swipe so his older brother would get a turn.

Once all the candy was picked up the party wound down. A few enjoyed wearing the head of the pinata on top of their heads. I got a fair number of very silly photo opportunities with the burro head. I think the silliest was of one of the fathers that stayed at the party. Daddies can sometimes be very silly.

We opened up presents, Max's party got to go first, and then it was time for all our guests to head on home.
Posted by Sarah at 11:46 PM