Fresh Flowers for a Crazy Weekend 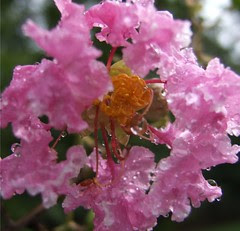 crepe myrtle
Originally uploaded by Teckelcar
I'm still pooped after this weekend's shenanigans. My club did it's big dog show up in Northern Virginia and all I can say is the Best in Show was not that far off the mark.

We had drama queens and divas, mostly just the human kind. I only screwed up one thing, but it is fixable. The rest was just a whole lot of noise.

Mind you I did have a good time, I got to stay at my friend's house and ride up with another good friend and fellow club member K. K and mesh very well. We are both "standard smooth" people (ie we have standard smooth hair aka the big short haired dachshunds), our dogs get along and we have complimentary schedules. We chatted the whole way and had a great trip. 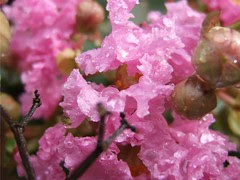 crepe myrtle 2
Originally uploaded by Teckelcar
The biggest drama we had was over the luncheon my club hosted yesterday, Monday. The person in charge of it almost completely blew it. Last weekend he called me in a panic, he hadn't done anything and nobody had called him about what they were going to bring. I calmed he down, told him to make the calls and we'll figure it out.

Meanwhile the second drama of the week was the club's insurance. It was due to expire and nothing had been done. With a few phone calls, a bit of faxing I got that mess straightened out with a day to spare.

In the end it all worked out, dogs were shown and people were fed. But it'll be a long time until I tackle anything like that again.

As for the flowers, they are crepe myrtles dotted with raindrops on the edge of our lawn. I thought they looked gorgeous with the rain drops on the petals. I'm very pleased with how well my photos came out.
Posted by Sarah at 11:48 PM