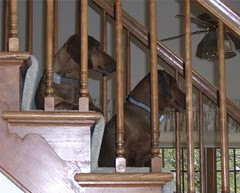 On Alert
Originally uploaded by Teckelcar
This is the dogs' preferred position, halfway up the stairs and looking out the back door. From there they have a clear view of the backyard and the deck.

They keep a wary eye out for marauding squirrels and pesky deer. If either is sighted, the dogs give voice and rush down the stairs to be let out. It is an important job and they take their guard duties very seriously. I feel so safe with the two of then on patrol.

Except now John is starting to mess with Dell's head.

John is one of the smarter dogs we have ever owned, only surpassed by Rally. She was brillant at getting her own way and manipulating everyone. If she had opposable thumbs, we would have been doomed. She would regularly trick Crunch (who was far larger and dominant) out of the comfy spot in our home in Wisconsin.

John is following in her footsteps.

A year and half ago he first demonstrated his intelligence by raiding the kids' candy buckets. An average dog would have ripped into them and gorged on the treats within, but not John. No, instead he would select one piece of candy a day. This lasted for about two weeks. I would find the occasional wrapper on the floor and would blame the kids. That is until I saw John in action. He would carefully put his paws up on te bench next to a candy bucket, slowly stick his nose in bucket, and then oh so delicately remove one piece of candy. I was stunned, then I moved the candy to higher ground.

Earlier this week John demonstrated his evil genius again. He causally walked by the back door, gave a mighty bark and contined to walk on. Dell, meanwile sacked out on the rug in the other room, sprang into action and high tailed to the backdoor, sounding the alarm. I let him out and watched him barrel off the deck, in search of whatever John said was back there. John then climbed the stairs and happily wagged while I told him what a naughty boy he was.

Poor Dell, he is such a very sweet and loving dog, but he is not the sharpest tool in the shed. I'm afraid he has a lifetime of being fooled by his brother.
Posted by Sarah at 11:49 PM