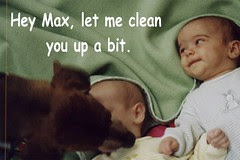 Max and Rebecca 1
Originally uploaded by Teckelcar
I found these photos and I thought it would be fun to share them with y'all.

They are from roughly seven years ago, Max and Rebecca were mere babes in arms. Grandma Diane and her good friend Signy, who is a photographer, came down to see the babies and take some pictures.

I remember the set up for these particular shots. The dynamic duo were on the floor on top of a very colorful mat. In fact it was deemed far too busy and a green throw was artfully placed around them. Just as the picture was about to be taken Crunch poked his head in the frame and gave Max a good face washing. 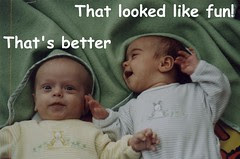 Max and Rebecca 2
Originally uploaded by Teckelcar
Once he was done with his self appointed duty he wandered off.

Max was completely unfazed (Which is quite a contrast with how would feel now, he does not like anyone or anything to kiss him and a dog washing his face is complete anathema to him.) and Rebecca squealed and reached toward Crunch.

Some would say the first picture was spoiled, but I love the sequence of the two pictures. I added the captions to them after they were first scanned in 2002 and to this day I still think they are funny.
Posted by Sarah at 11:57 PM