Artist of the Week: Baseball 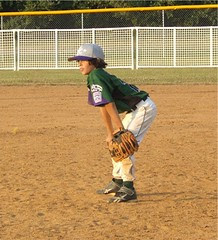 Nate
Originally uploaded by Teckelcar
In honor of the ongoing baseball tourney, Nate is the artist of the week.

So far it has been an exciting tournament. The first four games are pool play, then the top two teams in each pool play in the semifinals with the pool winners playing the championship.

The first two games Nate's team pretty much pounded the other team. They would start off down a few runs, but would come roaring back and soundly defeat them. The final scores were 20 to 10 and 22 to 4. The games are supposed to run to six innings, but in both of those games the slaughter rule was invoked in the fourth to end the other teams misery.

Yesterday's game promised to be a good one. We were up against the other undefeated team in our pool. 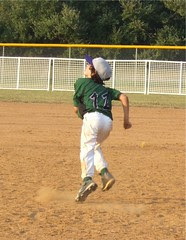 Nate2b
Originally uploaded by Teckelcar
The other team was very good. They started off with three runs and maintained their lead for most of the game, but our boys kept plugging along. We have an amazing depth in our pitching, we have four really good pitchers while most teams have two maybe three. The rest of the fielders are not too shabby, they are alert and responsive to whatever comes their way. Nate has been switching between second and center field. I'm always amazed at how he can just fire the ball back to the pitcher when he is way out in center field.

Then there is our offense, these boys can really hit. They have learned to wait for the right pitch. There are no easy outs on our team when they are at bat.

Anyway back to last night's game. 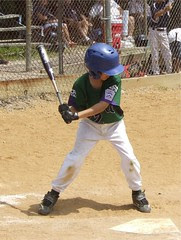 start of the swing
Originally uploaded by Teckelcar
In the fifth inning we had finally tied up the score. We had two outs and I think two on base. It was Nate's turn to step up to the plate, he was focused and ready to go. He has some outstanding statistics during this tournament, 6 hits in 7 at bats with two walks. In the stands we all started chanting Nate's name.

Jake asked if I was going to take pictures and I said no, I wanted to see what was happening and not through the viewfinder. I honestly don't remember the exact pitch count, it was a couple of balls and at least one strike. And then he got the pitch he was looking for. He drove a nice hit out towards center field. The ball hit the ground before anybody to get to it and Nate was off.

He ended up knocking in the winning run, by the end of the inning the score was 11 to 8, all they had to do was block the other team during the top of the sixth and they did it.

I asked Nate later if he knew he had batting in the winning run. He was genuinely surprised, he told me that he hit the ball and started running to first. He only knew it was a good hit because the first base coach (one of his team mates) was jumping up and down.

That's the kind of player Nate is. He was so focused in hitting the ball and getting on base he didn't even see where the ball went or what else was happening on the field. He really is a true athlete and not a show boat on the field.
Posted by Sarah at 9:53 PM