Because That's the Way I Roll 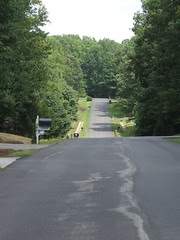 top of the hill
Originally uploaded by Teckelcar
Today for the first time in a long while I went for a bike ride. We have been kind of busy in the mornings and I've had a hard time being able to get out of the house and shower before having to go somewhere.

So I fell out of the habit.

Which was really a shame since we have been having one of the nicest summers ever. The temperatures have been moderate and humidity really hasn't been a factor. Basically I've been a bum.

But today I got off my tush, dragged out my bike and did it.

I have two different routes. Most of the time I just keep making right hand turns and end up on a road that doubles back almost to my road. It's a nice route with 5 good sized uphill climbs. Today, however, I went on my secondary route. Max wanted a different hat for tennis, so my plan was to swing by the courts and drop it off. 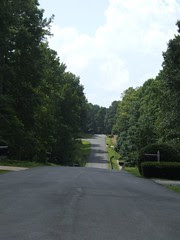 end of the road
Originally uploaded by Teckelcar
This route (obviously) goes by the pool and tennis courts and it too has 5 uphills climbs. It's a wee be shorter, but a nice ride all the same. It also has my two favorite hills.

The first picture shows the crest of the hill before the road plunges down and then shoots back up to a turn about. This is the best part. I get so much speed going down I can almost coast to the top of the other side.

I then get to turn around and do the whole thing over again.

The return ride isn't quite so easy. The hill at the end of the road is a bit shorter so I don't get quite the same amount of speed and I actually have to some work to get to the top. It is still a blast.

Riding about on flat roads is fine and dandy, but a bit boring. I love the fact that I have a nice bit of hilliness in my neighborhood.
Posted by Sarah at 10:56 PM