Doe, A Deer, A Female Deer 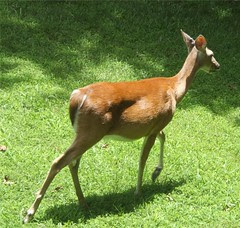 Doe, a deer
Originally uploaded by Teckelcar
I don't think people ever really believe me when I tell them that I view deer as a nuisance in my back yard. Oh, they are pretty to look at, but in the end they are just tall rats.

Let's take this doe for example. She was less than five feet from the house during the middle of the day. It took the combined excitement of at least two kids and a dog right over her head to finally shift her to the woods. Even then, you can see by her body language she wasn't in that much of a hurry.

I've had a doe actually step towards me as I rattled a bowl of dog food to get the dogs to stop barking at her and come inside. Talk about nervy. Obviously somebody in the neighborhood has been feeding the deer.

Heck I've even found hoof prints under the deck and my husband has had to beep the horn to shift them off the driveway.

So yeah, they have become tall rats in my eyes. Very pretty, but annoying nonetheless.
Posted by Sarah at 7:43 PM