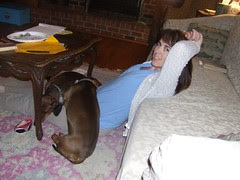 dog pile
Originally uploaded by Teckelcar
That's me, on the floor with not one, but two red oafs on my lap.

Wherever I go in the house the dogs will often trail after me, Dell's chin often bumping my heels. To say they want to be with me is an understatement.

Oh they love the rest of the family. The red boys are always up for a romp outside with Nate, but... I'm the Pied Piper. I just call out to them and they come a runnin' unless there is something far more important like a chipmunk trapped just out of reach. If I sit on the floor they swarm over me, desperate for my attention.

Even after I trim their nails they still want to be with me. Quite the opposite of Ms. Rally, she would disappear when the clippers came out. I had to be quick and snag her before she sequestered herself in her crate. The red boys are just a couple of big lovable goofs that want to be with Mom.

It's nice to be wanted, but 50 plus pounds of dog in your lap can be a bit much. So don't spend too much time on the floor with them in my lap.
Posted by Sarah at 11:59 PM