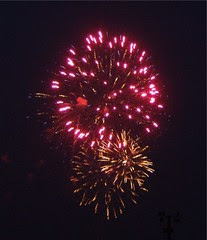 Bang!
Originally uploaded by Teckelcar
I hope everyone out there had a happy and healthy Fourth of July.

We went to the county's firework display last night. It was the first time we had ever taken the kids to an official fireworks event. Before we had hung out in a local parking lot about a mile or so from the staging grounds. It was a lot easier and far less congested than going to the big show itself. With small children you never really know how much they'll like seeing fireworks up close and all the loud noises associated with them.

Meryl came along with us. She picked up green beans and tomatoes and came over before dinner. At our house we had a fine repast of home made bbq beef ribs, mashed potato, fresh green beans, marinated sliced tomatoes, and mashed sweet potato. It was one of those great happy tummy meals. The huge spread almost made it feel like a summer version of Thanksgiving. 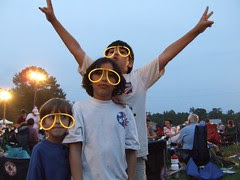 boys
Originally uploaded by Teckelcar
At around seven we headed out to the fairgrounds where the fireworks were going to happen. Larry, sensibly parked on the road to the event, pointing the car towards home, and avoided the whole parking lot nightmare (he's so smart). We trooped up the road and found a nice spot on the grass not too far from the entrance.

There were a whole slew of things going on before the main event, from bouncey tents in the kid's zone, freebies from area businesses, to fair food classics. Meryl, being a very indulgent person, took the kids off to get funnel cakes. Unfortunately the line was huge, it looked like over a half an hour long for funnel cakes, so they passed. Instead, the kids got glasses made from glow sticks. I love this picture I got of the three boys. Rebecca, for whatever reason, got in a real snit and was appalled over the idea of being photographed with her glasses.

As twilet deepened a few stray firecrackers went up, causing a cheer from the crowd. The music changed to a more patriotic vein with America the Beautiful hearalding the start. All four were entranced. The county had a very nice display, my only complaint was that I would have like a few more of the noisier ones. I love it when there is a huge bang and the rockets go screaming off. Overall we had a great time and I think we'll be doing it again next year.
Posted by Sarah at 8:44 PM