Artist of the Week: Collage 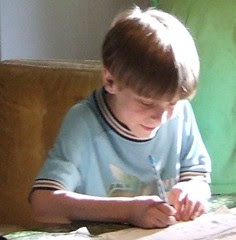 Max
Originally uploaded by Teckelcar
It's Max's turn to be Artist of the Week.

Larry took this picture of Max early last month. Originally the picture had all three boys with Rebecca just peeking in on the edge. I thought it was a terrific shot of Max and the pose is so utterly Max. I just cropped the image down and tweaked it just the slightest bit.

I love the lighting and it's such a classic snapshot of Max. He is so very focused on what he is doing with a hint of a smile dancing across his face.

It's not the highest quality of pictures, grainy and a bit blurred. However, I like it and it makes me happy and in the end that is what really matters. 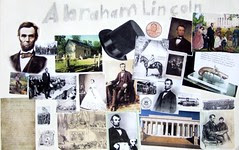 Max's poster
Originally uploaded by Teckelcar
But enough about the picture, instead take a gander at Max's collage.

In late February or so the second grade had a take home project that had to be done on a historical American. They had a short list (I think it was just four or five names) to choose from and along with a choice of three different projects. Max, obviously, selected Abraham Lincoln and a collage.

The collage proved to be very challenging for Max. He likes things to be orderly and a collage is decidedly not. I had to push him a bit to let go and allow some overlap. Together we worked out what images he would need and he picked them out from the resulting search. Then he did something I thought was very impressive, he did freehand lettering of the collage's title. I thought he did an amazing job for someone nearing the end of second grade. All I did was make sure he had the name correctly spelled.

I think the whole thing looks terrific as did his teacher.
Posted by Sarah at 11:36 PM