Artist of the Week: Two Cents 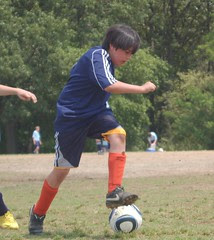 Jake
Originally uploaded by Teckelcar
It's that time of the school year when all sorts of projects get carted home. Jake was the first one, so he gets to be the artist of the week.

I'm not exactly sure who took this picture of Jake. His soccer coach emailed it along with the team picture he took at the end of the last game of the season. My guess it was not the coach (since he was busy coaching at the time), but possibly the coach's wife or some other family member. Either way it is a nice shot and I appreciate the picture being sent to us. It was a nice surprise.

I didn't get very many pictures of Jake in action this year, my time was often split between his and Rebecca's soccer games. Since his games were far longer I tended to stick with his sister. 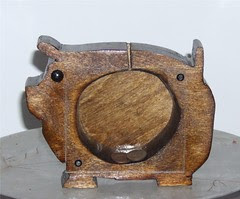 piggy bank
Originally uploaded by Teckelcar
Anyhoodle, take a look at the cute little piggy bank. Jake made it in his shop class along with a few other items and they all came home last week.

If you look carefully you can see the two pennies that Jake put inside. They give a bit of scale. The money is held inside by a clear sheet of Plexiglas that is just barely visible. It get the money out all you have to do is remove the two screws holding the plastic in place.

I think Jake did a terrific job. It is a very nice looking pig from it's stubby snout to it's perky tail. He cut and stained the wood himself under the direction of his teacher. The side opposite the window is separate panel of wood the Jake nailed on. The slit on the top is where the money is placed to drop inside.

It is such a proud little pig and it makes me smile.
Posted by Sarah at 11:51 PM