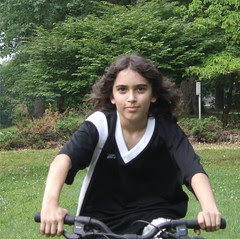 Nate
Originally uploaded by Teckelcar
Nate found out the hard way today that even though school has ended there are still things to be learned and you should listen to your mother.

Today was the big end of school pool party in our subdivision and Nate wanted to be away from me and with his friends as soon as possible. As he raced out of the changing room I buttonholed him by the pool and told him he needed sunscreen. He rolled his eyes and said "Why? I don't need it."
"Um, no you do." Was my oh so witty reply.

With a sigh he held still and asked if at least he could do it himself. I handed over the bottle and watched him do a totally half-assed job, at least I was able to wrest the bottle away from him and take care of his back.

So of course he got a blotchy sunburn. You can see all the areas he missed as they are glowing bright red. Nate noticed his bright red shoulders first as he readied for bed. As we surveyed the damage I noted that his back, the one place he grudgingly allowed me put on the sunscreen, was completely undamaged.

I hope he isn't too miserable, but I think I will getting a bit more cooperation from Nate this summer in regards to sunscreen.
Posted by Sarah at 11:27 PM