A Skink I Think 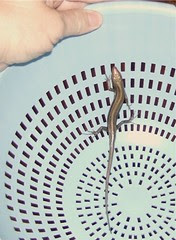 Skink
Originally uploaded by Teckelcar
We had an unexpected house guest today in the form of a five-lined skink. I'm not exactly sure how it got inside. Possibly it scuttled in when the kids left the door open, I'll never know. I do know, however, that its discovery caused a great deal of excitement this morning.

I was puttering about, doing dishes when an excited chorus of "A skink! It's a skink!" filled the air. I found the children clustered about the dog couch straining for a view of the errant lizard. I couldn't see it, but I believed them without question. Our yard is filled with skinks and it is not unusual to find them on the deck.

I knew I would eventually see the critter, I just hoped it would be before the dogs. On the upside it was a pretty good form of vermin to have about the house. Skinks are nondestructive, nonpoisonous, not aggressive, odorless and eats bugs. Full of win on all counts. I'll note here that Jake strongly objected calling it vermin, the skink was far too likable to be classed as such. I kinda agree with him, but it is far too much fun to call it Vern the vermin to stop.

So for the rest of the day we kept our eyes open.

I spied it shortly after dinner, but it darted under the dishwasher before I could nab it. At around quarter to 10 Jake saw it dart under his trumpet case. I had Jake stand on one side of the case as I readied my colander. We moved aside his trumpet and shooed the skink into my colander. It was a fairly mellow little creature that did not seem to be too disturbed by its capture. I took a few pictures and then released it into our backyard. Hopefully it will not return to inside the house.
Posted by Sarah at 11:41 PM