Getting a Little Squirrely 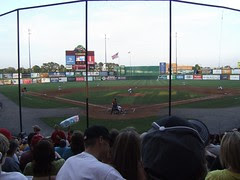 Maybe a strike
Originally uploaded by Teckelcar
Yesterday we decided to celebrate Memorial day in style. We grilled out, talked about the difference between Memorial day and Veterans day( Which interestingly enough, both are doubly significant dates in our family. Our wedding anniversary is on May 30th and Nate was born on Nov. 11th.), and caught a baseball game in the evening.

We were able to snag some great seats that morning, right behind home plate. Meryl came along with us and we marveled out how we could almost call the pitches. If you look carefully in the picture on the right you can see the ball on its way to the batter.

Nutzy
Originally uploaded by Teckelcar
As for who was playing, it was the Bowie Baysox versus the Richmond Flying Squirrels. We had been to numerous R-Braves games before they decamped to Georgia, but this was our first Squirrel game. The Squirrels may be just AA as opposed to the R-Braves AAA status, but the feeling in the stadium was a whole lot more fun. The mascot is Nutzy the Flying Squirrel and he was all over the place. Climbing the backstop, dancing on top of the dugout, and climbing up on the railings. Maybe he wasn't the best role model for kids at the game, but he was certainly gungho and happy to interact with the crowd. Only Rebecca was willing to approach Nutzy and she got a big hug for her bravery.

The game itself was pretty good. We saw several double plays and a really heart braking catch that robbed the Squirrels of a win at the bottom of the 10th (yes we got extra innings). Sadly, the Squirrels didn't win the game. The Baysoxs surged ahead in the 11th and held off he Squirrels for a win. 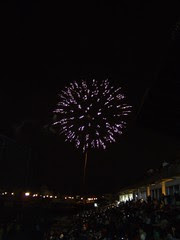 memorial day fireworks
Originally uploaded by Teckelcar
However, the loss didn't affect the post game fireworks. That was one of the big draws for me. I like baseball, throw in some fireworks and I'm there. It was well past 11 when we finally got home last night. The kids had a great time and didn't seem to suffer too much today from a short night of sleep. Normally I wouldn't have them up so late on a school night, but the school year is almost over and there isn't much going on now.

And hey, there were crazy squirrels and fireworks.
Posted by Sarah at 10:50 PM

That's nice that you actually take the time to explain the reason for the holiday to the kids. And the difference between the two days. There's no Memorial Day in Canada, but Veteran's day is actually a big day there. Being the daughter of a Vet, I always felt a bit disgruntled that Memorial Day = the day the pool opens, and Veteran's Day = "um, what? " for far too many Americans.

Of course, sadly, no one does Memorial Day like Israelis.

I love the "Flying Squirrels." There's just something refreshingly playful about some of the mascots down in the lower strata of the farm systems.

The Red Sox have a AA club called the Portland Sea Dogs, who we go see play when we're on vacation in Maine.

The Nats have a short-season affiliate called the Vermont Sea Monsters. Haven't got to watch them yet.