Am I Missing Something? 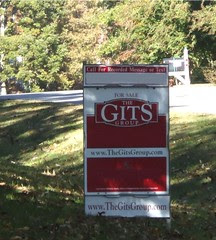 Gits Group
Originally uploaded by Teckelcar
I fully realize that it is the business owner's family name, but really?

I have always viewed the word git to be a rather negative descriptor. The phrase "stupid git" springs to mind.

I even went so far as to look up the word. According to the dictionary a git is a worthless or foolish person, British origin.

So maybe I'm mistaken that it is part of the common lexicon. Possibly the result of watching far to much Monty Python in my formative years.

Then again Larry, who had a far less Anglophilic upbringing (My family maybe 13th generation American but we still cling to the oddest aspects of our UK heritage. Seriously, how on earth have we remained English, Scottish and Welsh? My generation is the first one to really venture out in the gene pool.), agreed it was the oddest choice in business names.

Labels: nothing much, silliness

Before moving to Israel, I had a brief stint working in a real estate support company. One of the agents in the area is named Ed Ganeff. As in, Goniff, as in, the Yiddish word for "thief." Again, granted, it's his family name (really??? I'd change it), but considering up until last year, Vancouver real estate was astronomically overpriced (now it's just insanely overpriced), his name is a little too close to reality.

Real estate agents really seem to rely on the memorable names, not minding what they might actually mean.

That is an awful name. I, along with Git, would change it in a heartbeat.