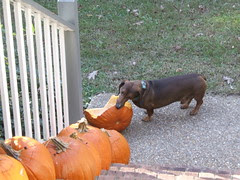 Pumpkin eater
Originally uploaded by Teckelcar
John loves eating pumpkins. Actually both dogs do, but after I yelled at Dell for snagging a lid off of a pumpkin I had just carved he has been less interested in pumpkins. Dell will still eat them, he just waits for permission now.

Anyhoodle, John doesn't wait for permission, he just helps himself whenever the mood strikes him. At least he has only been eating one pumpkin and has left it pretty much in place. At this point, two weeks plus post carving, not much is left. It looks like a small explosion of pumpkin pulp near the bottom of the steps.

As for Dell, he now doesn't approve of John's wanton destruction of the pumpkins. After I took the picture above of John, Dell bounced down the steps and gave John the hairy eyeball and stood by the pumpkins. 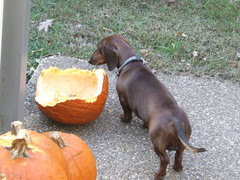 Disapproving Dell
Originally uploaded by Teckelcar
John's reaction was to casually stroll away, as though Dell had nothing to do with his moving off. I don't know if you can see it, but this picture captured the moment when Dell was standing in rigid disapproval next to the pumpkin. John, meanwhile, is halfway across the yard.

I found the whole thing hilarious. Dell has such a sunny, happy go lucky demeanor 99% of the time. However my chewing him out over the pumpkin lid really made an impression on our goofy boy. He has appointed himself defender of the pumpkins.

At least when I'm around. It wouldn't surprise me if he snuck in a few bites when I'm not present.
Posted by Sarah at 11:16 PM