Artist of the Week: Technical 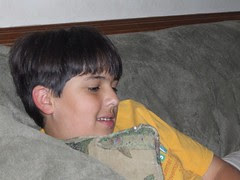 Jake
Originally uploaded by Teckelcar
In a purely technical manner, this week's artist is Jake.

As I'm sure I've mentioned before, I have to employ a form of ambush photography to capture my eldest child. It's not so much camera shyness as it is my son having an uncontrollable urge to make odd faces when a camera is pointed in his direction. The four pictures before this one consisted of him hiding behind his DS whatever gobbledygook that follows, a strange twisted open mouth, a squinty eyed duck face and one blurry action shot. Then I just sat near him and waited and got this fairly decent picture of him. He's looking down which makes it seem as though his eyes are closed, but really they are open. 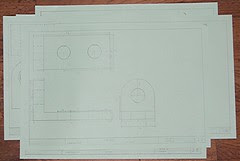 technical drawing
Originally uploaded by Teckelcar
His drawings, on the other hand, are a whole lot easier to photograph. The only tricky part is getting the light balance right and the contrast.

The drawings in question are from Jake's technical drawing class in High School. I still can't get over the fact that I'm the mother of a high schooler. I'll always think of myself as riding heard on grade schoolers. Anyhoodle, he wanted to take Latin, but it did not fit in his schedule so he decided to take Basic Technical Drawing instead.

He has been having a great time in class. It is right up his alley, minutely examining things and getting them down just right. So far he is finding the class to be an easy A, a nice respite with an all honors course load. The whole class seems to be fairly effortless for him with the exception of one extra credit assignment, a film reel. He hasn't quite sussed out the best way to draw it. As he put it, it's all circles within circles and some oddball shapes thrown in for good measure. He'll get sooner or later, I have no doubt about that.
Posted by Sarah at 10:54 PM