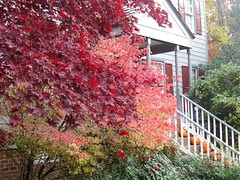 Fall Color
Originally uploaded by Teckelcar
Here are some of the pretty, pretty leaves out front.

The dark red is Japanese Maple and the more washed out red and orange is my waaaay past peak Burning Bush (winged euonymus). Then down below there are bright splashes of red berries amongst the green leaves of my Heavenly Bamboo.

Interestingly two of the above are considered invasive species and should have never been planted in the first place. Which is a pity with the Burning Bush. I've haven't had any problems with it and I'm fond of the bright red it produces in early fall. The Heavenly Bamboo, however, I could happily rip it all out if it weren't so well established and... well invasive.

As for the bright orange pumpkins on the steps, they should have been tossed last weekend. They make for a pretty picture, but the insides are nightmarish to say the least.
Posted by Sarah at 3:16 PM