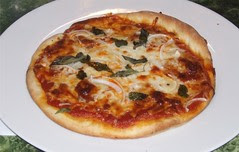 I thought so and took a picture of it when I made it way back in August.

This was what dinner was supposed to look like tonight. We were having make your own pizza night. However our oven had different plans.

It initially heated up to almost 450. Then, unbeknown to me, the bottom heating element gave up the ghost. I was happily watching the cheese brown unaware of the fact that the crust below really wasn't cooking. It wasn't until I started pulling pizzas from the oven that I discovered the true state of affairs.

It was then a mad scramble to figure out how to cook the pizza without a fully functional oven. In the end I decided to place the metal pans directly on the cook top and finish off the pizzas that way.

It was far from ideal, but it did work. The pizzas were a mess; cheese sliding off and a bit over done, the bottom of the crust a bit burnt in places. But, they were edible.

So it looks like I'll be buying a new heating element tomorrow.
Posted by Sarah at 11:16 PM