Artist of the Week: Small Spaces

Nate and Pony
Originally uploaded by Teckelcar
This week's artist is Nate and today he got to ride the sweet little pony in this picture.

We have a friend with numerous horses and she's been wanting us to come out and ride for some time. Today we were finally able to coordinate schedules. Rebecca was beside herself with excitement, the boys less so (in fact Jake the whole thing a miss and stayed home). I wasn't sure at first if Nate and Max would ride, but in the end I got all three up, ride a bit on their own and even go at a trot. The pony was incredibly good natured about three kids going on and off. It wasn't until the end that she would head to the gate, indicating that she was done and wanted to go to her stall. 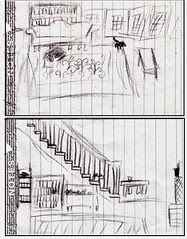 small spaces
Originally uploaded by Teckelcar
But enough about ponies, instead let's focus on small spaces.

At some point I had given Nate a small pad of paper that was roughly 2 inches by 3 inches. I think it's original purpose was to collect friends' email addresses and phone numbers. However it he has long strayed from the pads original use. Just the other day he presented to me two slips of paper with sketches of essentially the interior of our house.

The top drawing is of our living room with dog on the far right corner of the carpet (it's a bit easier to distinguish in the original sketch). Nate intended the picture to be a some what abstract study of the room. I see the abstract elements, but it is still very clearly the living room.

The lower picture is a side view of the stairs leading up to the second floor. Again, he was going for a more abstract feel. Meanwhile I found this picture to be a dead-on representation. Nate's drawing has come a long way during the past 6 months. He took art the first quarter of the school year and it looks like he learned quite a bit.
Posted by Sarah at 11:19 PM