Artist of the Week: Carving

Jake, Nate, Max, and Rebecca
Originally uploaded by Teckelcar
This weeks artist, or rather artists are Jake, Nate, Max and Rebecca. This year was a very significant one in our annual Halloween pumpkin carving extravaganza, all four got to design and carve at least one pumpkin by themselves.

Until now I've been leery of setting them all loose with knives. Jake has been carving a little bit for the past couple of years, Nate even less so. I had some metal cookie cutters that were designed for walloping into a pumpkin and knocking out a shape. The forms came in a variety of shapes and sizes, but were honestly a real pain to use. They would get stuck in the rind of the pumpkin and would inevitably get battered and squished. It was a good idea, but was lacking in execution ( the biggest drawback to the kit was the rubber mallet. It was easily the smelliest tool I have ever encountered). 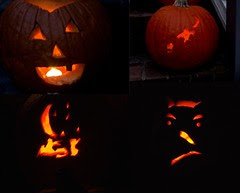 pumpkins
Originally uploaded by Teckelcar
So this year they got to use the knives.

Going clockwise starting from the upper left we have Rebecca's very traditional one tooth pumpkin. It's such a happy looking face. I love how the eyes are just a little bit cockeyed, it adds to the overall charm.

Next we have Max's flower, bat and moon. He always makes tiny detailed drawings and this pumpkin was no exception. He did a beautiful job drawing and craving his creation.

On the lower right is Jake's grumpy old man. Like Rebecca's it is a bit more traditional. Jake's observation about it, after he was done carving, was that the pumpkin kind of looked like an old guy that would yell out Hey kids! Get off my Lawn!" So of course this was the pumpkin we put at the end of the driveway to bring in trick or treaters.

Last up we have Nate's zombies. I apologize for the poor quality of the picture. I had a hard time setting up to take this pumpkin's picture. The carving, like Max's, is a tableau of zombies under a cresent moon and stars. He had a hard time carving the stars and ended up with a sort of triangular shape. I think he did a great job and the pumpkin looked great once it was lit up.

All four had a great time drawing their designs on the pumpkins and then cutting them out. The best part for me, however, was that nobody sliced themselves with the knives. It was a sucess and I forsee more carving in the future.
Posted by Sarah at 11:59 PM