Artist of the Week: Shoebox Guitar 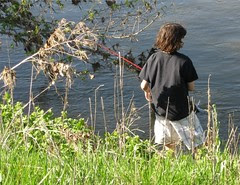 Fishing on the Shenandoah
Originally uploaded by Teckelcar
This week's artist is Nate.

I took this picture of him while we were on vacation at Shenandoah River State Park. The fishing conditions were terrible with the river running very high and fast. You can see a little bit of the whirlpools and eddies that dotted the surface of a very angry looking Shenandoah river, but Jake and Nate had fun learning the basics of how to cast and reel a fishing rod.

Each morning they would be eager to go out with Larry. At first they would bring home badly tangled lines that I would patiently tease apart and reel back up. But as they got the hang of things the tangles and snarls diminished. Which was a good thing, because I was getting tired straightening out fishing line.

As for Nate's artist endeavor this week, it too involves fishing line.

He was partnered up in class and assigned to make a musical instrument that can play eight notes from materials at hand. Nate and J. settled on making a one string shoebox guitar. The end result was pretty good, below is a video of Nate playing their creation.

I don't know what the teacher thought of it, but I'm impressed. Nate was even able to roughly tune it. Hopefully we will find out soon what his grade is.
Posted by Sarah at 8:17 PM