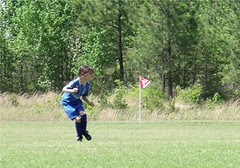 intensity
Originally uploaded by Teckelcar
Rebecca has certainly evolved as a soccer player.

When we first signed her up it was almost comical. She loathed practice and would only cooperate after I threatened to deny her post game snacks if she did nothing during practice. During the games she would be a bit more animated, particularly if her ball was used as the game ball, because by gum nobody else was allowed to touch her ball. Then there was the time she had a snit and stood there, arms folded and ignoring the ball, even when it was at her feet.

After that somewhat disastrous season we had her sit out the next. There was no point wasting her time and the team's time if she wasn't going to try. However she still had to schlep to all her siblings practices and by the end she warmed up to the idea of trying again. At least then she wouls have something to do.

Now she has become a fairly intense and competitive player. Like her brothers, she is not afraid of the bigger kids. When she gets knocked down she pops right back up. Oh and she has a wicked tackle and is not afraid to use it. This intensity is evident in the above photo. She is very intently watching the ball and moving up the field alongside, ready to pounce if it comes her way.

Rebecca has come a very long way from her first foray into soccer.
Posted by Sarah at 11:54 PM