Artist of the Week: Name 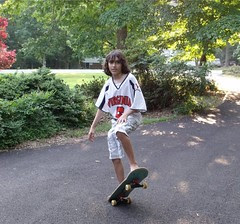 Nate, a photo by Teckelcar on Flickr.
This week the honor goes to Nate.

I took this picture of him a few weeks ago at his request. He needed pictures of himself for a project he was doing in school. I was happy to oblige and dutifully followed him about as he did an assortment of poses with his lacrosse stick and his skateboard. I certainly was not going to complain, for once we wants me to take is picture. Lately I have had to use my photo-ninja stealth skills to get any sort of pictures of him that did not involve him deliberately shaking his head. An era to be known as the blurry mop top years.

Anyhoodle I like this picture and it pretty much shows what Nate would rather be doing now. According to him this last week of school has been sheer torture. The days drag on and on with the end of the week stretching away. The end is near, but not near enough for Nate. 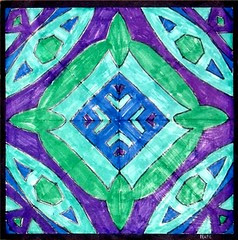 Nate art, a photo by Teckelcar on Flickr.
And of course the end of school brings with it all manner of objects that hadn't quite made it home until now or have been unearthered from the depths of his backpacks (And yes, he does have multiple backpacks. The middle school operates on an even odd day schedule. Therefore, Nate has an odd day pack and the even day pack.

This particular piece had come home a while ago, but got lost amongst Nate's papers. It had just recently resurfaced and I thought I better photograph it before it disappears again or gets accidentally destroyed.

The design is rather kaleidoscopic and has four axes, all fairly obvious. However how he created the design is a bit of a surprise. If you look closely in the corners you'll see an N and it's mirror image. As the eye travels along the axis that goes from corner to corner you'll see an A, a T and then an E. All of which are reflected below the axis. It turns out the design is made from Nate's name. I rather clever idea that worked out very well for Nate.
Posted by Sarah at 11:48 PM