Artist of the Week: Parsnip Racer 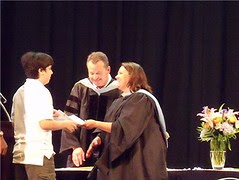 Awards, a photo by Teckelcar on Flickr.
Or alternatively: Pimp My Parsnip.

This week's artist is Jacob and what a busy final three weeks of school it has been.

During the first week of June the high school had its various awards functions. Freshmen and Sophomore awards were combined while the Juniors and Senior each had their own ceremony. We had gotten notification from the school that Jacob would be receiving some sort of award, but for what was not mentioned. We all went to the ceremony and found out that Jacob is now a member of the Junior Honor Society. He also got recognized for his participation in the robotics club.

The following week was the big band dinner and awards and Jacob was recognized for being among the most improved freshmen. His playing has really progressed this year from the combined efforts of his band teacher and trumpet teacher. 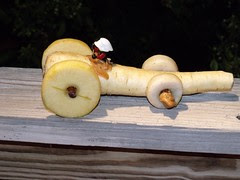 Parsnip racer, a photo by Teckelcar on Flickr.
Which then brings us to the last week of school.

The last week is dedicated to finals for the underclassmen. Jacob, by getting perfect scores on his two SOLs (one of the more unfortunate acronyms) was exempted out of two of this finials, World History and Geometry, and band was a combination of performing for graduation and returning his tuxedo dry cleaned.

The rest were mainly written exams with one notable exception. In one class, Honors Engineering Foundamentals, he had to design and build a car that was completely edible. The car also had to travel down a ramp with a slight incline and have a Lego person passenger/driver (the lego was the only inedible part).

After a couple of false starts with a butternut squash (looked great, but didn't roll) and cucumbers, he settled on a parsnip. I helped him with the electric drill, but the rest was his doing. The large wheels were cut from rutabagas, the small wheels from turnips, and the axils were cinnamon sticks (technically edible, but I certainly wouldn't want to munch on a whole stick). Interestingly enough we discovered that we have a drill bit that is the exact diameter of spaghetti.

In the above picture we have caramels holding things in place, but in the final entry Jacob switched to some rather large gumdrops. A bit of fruit roll-up stripes were added and a flag composed of spaghetti with a goldfish cracker. The resulting creation was quite jaunty and performed quite well. I wish I had snagged a photo before he took it to school, but at six in the morning I'm not thinking about my camera. At least I took a few photos of his first parsnip.
Posted by Sarah at 11:58 PM

I love it! It does look like a real race car, and I'm glad to hear it performed well.

But I think I have it backwards? Is the Lego guy facing the big wheels?