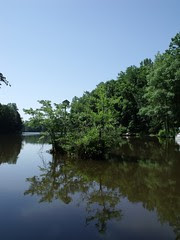 shoreline
Originally uploaded by Teckelcar
Well Flickr still stubbornly refuses to admit I have a blog, but I promised pictures and by gum I'll post my pictures even if I have to go through the tedious task of cutting and pasting all of the stupid HTML code.

So as you probably can guess this week's theme was reflection. I decided to go with the straight forward interpretation and not go all introspective. It was a far sight easier and we had the beautiful weather with clear blue skies to pull it off.

Yesterday was lovely, the horrible heat and humidity had broken leaving behind cooler temperatures and cloudless skies.
I figured my best bet for reflections would be the pond in my subdivision. At the boat dock I took a fairly standard shoreline picture. It was pretty enough, but essentially boring. 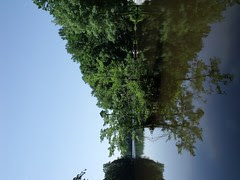 I like it, I think it is far more interesting to look at with its skewed perspective. Then again Meryl will tell you that I would like because I have a skewed perspective on life in general. The cloudless sky really makes the picture and I'm glad I went out yesterday. Today I would have had a sky streaked with cirrus clouds, pretty but would not have reflected very well. 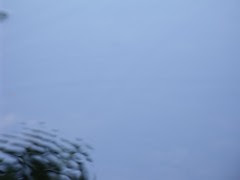 ripples
Originally uploaded by Teckelcar
Another funky picture I took was of leaves reflected on the water. The surface is marred by ripples, distorting the leaves' reflection, giving the picture a lovely dreamy quality. At the time I was trying to photograph one of the dragonflies buzzing over the lake. It would have been a neat image of the dragonfly and its refection, but the insects were far too fast and erratic. The few I were able to capture just were not quite good enough to make me happy. I think the ripple picture has a lot more going for it than any of the insect pictures. Yet I still didn't have the what I was looking for. I didn't know what I wanted, but nothing had really clicked.

Since it was such a lovely day I kept on shooting pictures. Time was not an issue and with 4 gig card I didn't have to worry about how many pictures I was taking. 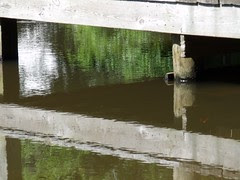 dock
Originally uploaded by Teckelcar
I turned my focus to the dock itself. These pictures were far more interesting than the shoreline and far more successful than the dragonflies. The one I have included here I think is the best of the lot. The silvery wood reflected well and I like all the diagonals. This picture was a serious contender for the MCP Project 52.

As I sat on the boat ramp I noticed a fishing line flying out behind a small island. A boat quietly came into view (only paddles and electric motors are allowed on the pond) and pulled up to the dock. Initially I was annoyed with the boat, it's ripples spread far and wide, but then I noticed something else was behind the boat. 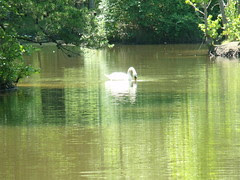 glows
Originally uploaded by Teckelcar
A swan was gliding behind the boat. It was following along, hoping for a handout.

Well this changed everything. A hawk had flown by earlier and I was disappointed that I hadn't gotten my camera up in time. It was not at all afraid of people, which is not a good thing, but worked for me.

I like this picture I took of it gliding along with the sunlight almost making the feathers glow. It is a artifact of the distance and lighting. I mess about with this picture and considered sending in this to MCP Project 52, but the focus wasn't up to snuff and I had better ones. 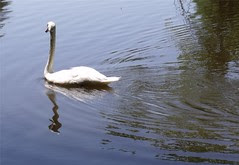 swan
Originally uploaded by Teckelcar
This picture was the one I ended up submitting. When I took it I knew right then and there I had the picture I wanted.

It's crisp, clear, and the colors are just right. The water is murky, as you can see in the previous photo, but here it's reflecting the clear blue sky. I like how the bird's head is slightly turned away as it heads out on the water. The wake of the swan distort its reflection with out destroying the image. 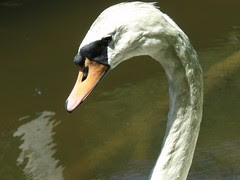 swan profile
Originally uploaded by Teckelcar
As for yesterday, this was the picture I wanted to post. It is literally straight out of the camera. I was shocked at how well it came out when I downloaded it from the camera. I think I was about 4 feet from the swan and was just merrily snapping away.

It doesn't have enough reflection (in my opinion) to qualify for the photo group, but it is too good not to share.
Posted by Sarah at 3:01 PM